Our Christmas Letter for 2012. 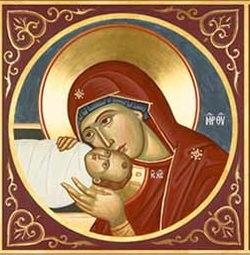 and may all His blessing enrich your life and that of your dear family - all the way to Heaven.

financial support, making it possible for us to travel, pay our bills, and

to help others and thus give them hope.

Her Master’s Degree, but we have been extremely busy this year – the
Lord kept us out of mischief.  Every month we have been honored to

give a retreat somewhere or asked to pray with others. In January we

to come back to testify before the congressional committees on the sanctity of marriage.  Sister was chosen to speak out of the 200 there and Channel 5 selected her statement, “God made Adam and Eve, not Adam and

Steve,” to air on its news channel.

February was our annual Ft. Worden retreat that Kathy is now in charge of, and we

had 120 come and two Benedictines from Mt. Angel, Oregon for the retreat Master.  We are very sad to say that the 2013 Ft. Worden Retreat had to be cancelled.  Please pray for and plan to attend the 2014 Retreat.

In March we gave a retreat at Cashmere and Leavenworth on the Last Seven Words of Christ.  The following week we gave a talk to the prayer group at Port Angeles, on Mary, the Mother of God.

At the end of April and the beginning of May we drove down to California, to see Kathy’s family and visit with our friends from the prayer group in Yreka.  Three of the members of the prayer group passed away this year.  It was also a business trip, so as usual, not enough time to see everyone.  Stopped at friends coming and going – again the time is just too short.  We gave a retreat at Buckley and gave a talk to the prayer group at St. Louise in Bellevue.

We love getting together with Fathers Bill and John Shaw at White Swan, all the children for Vacation Bible School, and the parents and parishioners.  It is always a delightful week in June.  We left there and went on to Spokane and gave a retreat at the Immaculate Heart retreat center.  Our added treat was dinner with Father Armand Nigro, S.J..  The next Friday we went to St. Thomas More in Lynnwood to give a Life in the Spirit seminar.

In August Kathy flew back to Wisconsin for her annual family reunion.  Sister stayed in Anacortes for Faith on Fire, held the same weekend this year at our parish.  Kathy was able to go to Our Lady of Good Hope apparition site near Green Bay, WI, with her brother Larry and sister, Mary, and she also went to a grey hound event with her sister, Mary, at Sturgeon Bay.

We gave a Life in the Spirit seminar in Beaverton, OR, and one in Port Townsend in September, and helped with one at St. Thomas More in November.

Our highlight of the year was the honor to be able to go to the canonization of Kateri Tekakwitha, first Native American to be canonized, at St. Peter’s Basilica in Rome.  Knowing Jacob Finkbonner, the young boy whose miracle made her canonization possible, was an added bonus.  Dear friends made it possible for us to go.  We went with a small group: Suzanne Frizzle and Laurie Liberty joined us from Washington, and we went with Father McCarthy, Mary Alice Rossini and her son Bill from Connecticut.  We rented a ten passenger van and spent one week traveling around central Italy and the second week we spent in Rome.

We visited Bolsena and Orvieto.  In 1263 a German priest, Peter of Prague, was on pilgrimage to Rome praying for renewal of his faith.  He particularly had doubts that when he prayed over the bread and wine that they actually turned into the body and blood of Jesus.  On his way home he passed through Bolsena and stopped at the Church of St. Cristina to pray at her tomb.  Cristina was a young girl who converted to Christianity against her father’s wishes and to make matters worse, destroyed his idols.  He tortured and killed her as punishment.  While Peter was saying Mass, as he said the words of Consecration, blood began dripping from the host and onto the altar.  Pope Urban IV was then residing in Orvieto, 10 miles away.  A procession, led by the local bishop, brought the Host and the linen cloth with blood stains to Orvieto.  The pope commissioned St. Thomas Acquinas to compose the music and liturgy to celebrate the Most Holy Body of the Lord (Corpus Christi) and one year after the miracle the pope instituted the feast of Corpus Christi.  We still sing Thomas’ music at Benediction.  A miracle of art was built to house this miracle – the Cathedral of Orvieto.  It was begun in 1288 and contains the cloth with blood stains and a beautiful tabernacle houses the Precious Host.  In describing the Cathedral, with its elaborate façade with rich statuary, marble bas-reliefs, and mosaics, Pope John XXIII said that on Judgment Day, God would send his angels down to earth to pick up this façade and transport it back to heaven. We certainly saw many beautiful Churches and art work everywhere we went.

At Viterbo we saw the Palace of the Popes and the tomb of Pope John XXI.  Civita Di Bagnoregio was a rare treat to see a medieval town where St. Bonaventure was born, but all the area around it has eroded away, so the remaining buildings are high on a peak and the only way to get there is on a long bridge.  The rain stopped and we were treated to a double rainbow as we walked out to the town.

From Orvieto we went to Assisi, the home of St. Francis, the saint that was the first to receive the stigmata, the wounds of Christ, on his body.  Saint Pio, who died in 1968 is one of more recent people who also had these wounds.  We went on to Norcia where St. Benedict and his twin sister Saint Scholastica were born and are buried.

We turned inland to see the Veil of the Holy Face at Manoppello.  Padre Pio (now Saint Pio) was seen before it.  He had the gift of bi-location.  A priest, Fr. Domenico, asked him what he was doing there and Padre Pio said this was the greatest treasure of the Church next to the Mass.  At the time, Padre Pio was gravely ill in his cell at San Giovanni Rotondo and died that night.  This is the cloth that was over the face on the shroud.  It shows the image of Jesus’ face, alive with His eyes open, even the pupisl seen.  The fabric is so thin that the image is visible before and behind the shrine and so transparent that a newspaper, put behind it, could be read even at a distance.  The guide said this fabric was made for priests, kings, and God.  A forensic expert says that Jesus is saying, “Abba”.

We visited Lanciano, where in 750 a similar Eucharistic miracle took place as later to happen at Bolsena – that is to remove doubts of the priest who doubted that his words said during Mass changed the bread and wine into the Body and Blood of Jesus.  As he said the words of consecration, the host turned into flesh and the wine turned into blood.  In 1970, analysis of the Relics confirmed that the Host transformed into Flesh is true Flesh, consisting of striated muscle tissue of the myocardium (part of the heart) and that the Wine transformed into Blood is true Blood of the blood type AB, which is the same as that found on the Shroud of Turin.  From there we went to the tomb of St. Pio & then to Sorrento.                The four of us from Washington took a taxi for a day drive along the beautiful Amalfi Coast.  It was supposed to rain that day, but we had a gorgeous beautiful drive.  St. Andrew’s tomb is in the beautiful Church at Amalfi.

We spent a week in Rome.  We turned in the van, so we learned to travel by subway, bus and taxi.  We met Bishop Sartain and his group with the Finkbonners and climbed by kneeling up the Holy Stairs with Jacob.  These stairs were the ones that Jesus went up before Pilot and were brought to Rome by St. Helena about 326.  At St. Paul’s Outside the Walls is Paul’s tomb and the chains that held him while prisoner in Rome.  We saw the pillar that Jesus had been tied to be scourged. At St. Mary Major was an early icon painted by St. Luke and the manger where Jesus was born.