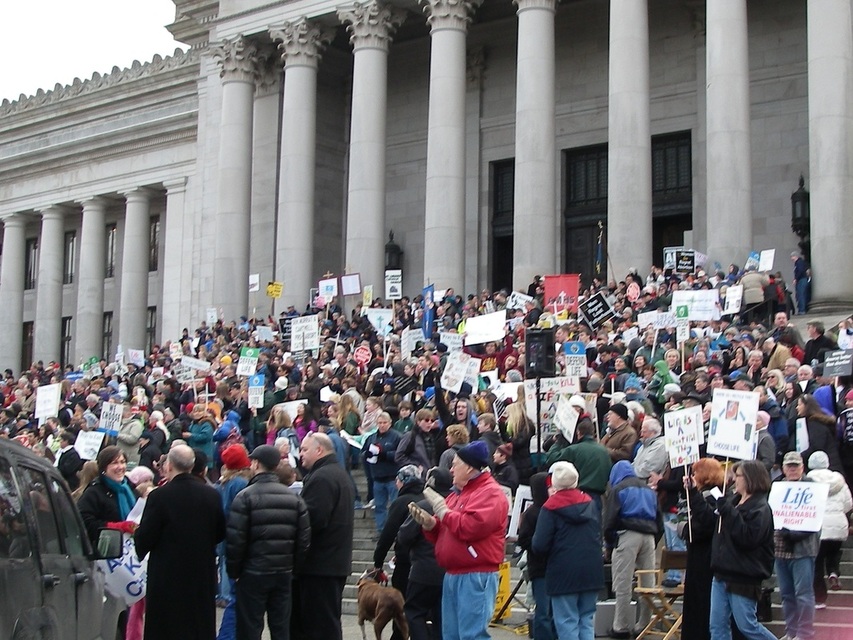 January is pro-life month.  Above is the 2013 March for Life at Olympia.

This article gives a logical explanation, step by step, of why the ruling by the Supreme Court in its Roe v Wade decision is completely against every principle of human life.

Civilization and culture have arisen from ten fundamental principles.  According to Robert J. Spitzer, S.J., Ph.D., in his book “Ten Universal Principles, a Brief Philosophy of the Life Issues,” three of these principles concern objective truth, three concern ethics, three concern the dignity and treatment of human beings, and one concerns personal identity and culture.  Spitzer stated “Failure to teach and practice any one of these principles can lead to an underestimation of human dignity, a decline in culture, the abuse of individuals and underestimating the potential of human life.  Failure to practice several of these principles will most certainly lead to widespread abuse and a general decline in culture.” (p.xi)

Principle 1, first formulated by Socrates, Plato and stated by Aristotle, is the Principle of Complete Explanation.  The best opinion is the one that explains the most data and produces the most evidence (p.1).

With respect to life issues this is important because a theory of human personhood that regards a person as a mere physical thing does not explain the self-conscious or having desires such as unconditional Truth, Beauty, Love, and Goodness (p.10).  If humans are viewed and treated as mere things they could be thought of as cannon fodder, slaves, or subjects for experimentation (p.11).

A zygote is the initial cell formed when a new organism is produced by sexual reproduction.  Some biologists hold that a single-celled human zygote cannot be considered other than a human being, and then they claim that if this zygote is not implanted, it is not yet a human being – an obvious contradiction.

Dr. Jerome Lejune, said Spizter, showed that a single-celled human zygote will ordinarily become a fully actualized human being if he encounters no artificial or natural impediment to its development.  He was able to show this through an instrument called a DNA sequencer .  This sequencer produces evidence assessable through one’s senses.  Anyone could use his sequencer or another and obtain the same result (16-17).

If persons are defined as actualizable human beings, then a single-celled human zygote would have to be considered a person.  If we do not use the word “actualizable” in our definition of ‘person’, said Spitzer, then any human being which is not fully actualized could be considered a nonperson (p. 17).  If we remove everything that is arbitrary in our definition, we are left with the only criterion of “person” as the presence of a human being – this, in its earliest form, is a one-celled human zygote, even if it is not implanted (18).

Principle 4:  The Principle to avoid unnecessary harms.  We know it as the Silver Rule:  Do not do unto others what you would not have them do onto you.  This principle is the foundation of ethics, law, justice, and rights.  It deserves the greatest protections as we cannot live long without it.  If it fails, all other ethical principles fail as well (21-22).

The moment we think it all right to harm others unnecessarily, society turns to theft, injury, violence, and murder, said Spitzer (22).

Roe v. Wade violates this principle because it justifies harm to a human being (23).  Their decision was grounded on the assumption when in doubt assume that human life does not exist.

The majority of Roe v. Wade wrote:  “We need not resolve the difficult question of when life begins.  When those trained in the respective disciplines of medicine, philosophy, and theology are unable to arrive at any consensus, the judiciary, at this point in the development of man’s knowledge, is not in a position to speculate as to the answer” (23).

If one is uncertain about whether a being of human origin is really human, then one should presume that it is human because it came from human beings, wrote Spitzer (24).  This ruling (Roe v Wade) is based on subjective ignorance.  It is the absence of the knowledge of evidence (25).

If one is uncertain about personhood, people who are dependent upon others, less educated, those with physical defects could be harmed, marginalized or even killed.  The judges could have referred to a dictionary, said Spitzr, as the primary definition of “person” is “human being” (27).

Legal personhood is not defined into existence by lawyers, it exists in the intrinsic worth of existing human beings, wrote Spitzer (32).

Principle 5:  The Principle of consistent Ends and Means.  Thomas Aquinas wrote, “One cannot use an evil means to achieve a good end; the evil of the means will undermine the goodness of the end (40).

This principle, wrote Spitzer, is frequent in concerns over life issues.  Some argue that the good end is allowing women to have custody of their own body and it is all right to allow the killing of an unborn human being.  This is obvious that a wrong means is used to attain a good end (41).

In Roe v. Wade the majority arbitrarily divided fetal development into three stages (trimesters) declaring that states could take great interest to prevent the killing of a fetus only in the last stage (50).

The idea of “degrees of personhood”, wrote Spitzer, is quite troubling, because it can be used in attempting to justify every form of bias, prejudice, marginalization, and even imprisonment and death on the basis of a completely arbitrary criterion.  This is precisely what justice and law were meant to prevent.  How, Spitzer asks, can the highest court in the land legitimize a train of thought which undermines the principle of justice which it is sworn to uphold (50)?

Principle 7:  The Principle of Natural Rights.  All human beings possess in themselves (by virtue of their existence alone) the inalienable rights of life, liberty, and property ownership.  No government gives these rights, and no government can take these rights away (52).

Thomas Jefferson placed them in the Declaration of Independence:  “We hold these truths to be self-evident, that all men are created equal, that they are endowed by their creator with certain unalienable Rights, that among these are Life, Liberty and the pursuit of Happiness” (53).

In the Declaration of Independence, Jefferson does not attempt to justify which right comes first, but assumes that life precedes liberty, and liberty precedes other natural rights (75).

Principle 9:  The Principle of Limits to Freedom.  One person’s freedoms cannot impose undue burdens upon other persons (82).  This principle applies to life issues in many ways.  First, with respect to the abortion issue, in order to grant a new freedom to mothers to abort their fetuses, the courts have to impose an undue burden on these unborn children to die.  Roe v. Wade decision has violated this principle by imposing undue burdens on one group in order to give greater freedom to another group.

Principle 10.  The Golden Rule:  Do unto others as you would have them do unto you.  This Rule includes the Silver Rule because it would be difficult to pursue the good for others while harming them.  Virtually every religious tradition, wrote Spizter, has some form of the Silver Rule, which is the foundation of all ethics and laws prohibiting certain behavior.  The Old Testament states in Tobit 4:14 “What you hate, do not do to any one”.  Jesus formulated the Golden Rule.  By removing the “nots” of the Silver Rule, he transformed ethics from obligation to avoid harm to the strong desire to optimize the good for one’s neighbor.  He wanted the transformation of the human heart toward genuine love of one’s neighbor.  Jesus wanted the human heart to be transformed toward love of one’s neighbor so that one sees the unique dignity, lovability and goodness in others and to do good toward others as if we were doing the good for ourselves (88-90).

The majority of the judges that voted to pass Row v. Wade wrote to explain their rational:

If this suggestion of personhood is established, the appellant’s case, of course, collapses, for the fetus’ right to life would then be guaranteed specifically by the Amendment.  The appellant conceded as much on reargument.  On the other hand, the appellee conceded on reargument that no case could be cited that holds that a fetus is a person within the meaning of the Fourteenth Amendment. . .

All this [the exclusively postnatal use of “person” in the Constitution and related precedents], together with our observation, supra, [mentioned earlier] that throughout the major portion of the 19th century prevailing legal abortion practices were far freer than they are today, persuades us that the word “person,” as used in the Fourteen  Amendment, does not include the unborn. (Section IX.A)

Texas urges that, apart from the Fourteen Amendment, life begins at conception and is present throughout pregnancy, and that, therefore, the State has a compelling interest in protecting that life from and after conception.  We need not resolve the difficult question of when life begins.  When those trained in the respective disciplines of medicine, philosophy, and theology are unable to arrive at any consensus, the judiciary, at this point in the development of man’s knowledge, is not in a position to speculate as to the answer. (Section IX.B) (62-63).

This reasoning of the majority, wrote Spitzer, is logically wrong and violates Principles 1-3.  It completely ignores the natural rights of prenatal human beings thus violating Principle 7.  It does not assess human life according to its full potential thus it violates Principle 6, and it grants permission for the serious violation of the Silver Rule, Principle 4. In fact, it does away with just about every principle of humanness and civility and cannot be considered anything better than a disaster in the history of civilization (63).